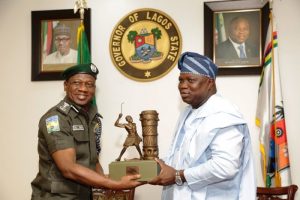 Governor of Lagos State, Mr. Akinwunmi Ambode has confirmed that he will procure a surveillance aircraft and gunboats to tackle incessant kidnapping in the state.

This was made known by the  governor spoke when the Inspector General of Police, IGP, Ibrahim Idris paid him a visit at the State House in Ikeja, Lagos, Southwest Nigeria.

He  also requested for two additional Police Area Commands from the IGP, saying that it would go a long way in tackling the nefarious activities of criminally minded persons once and for all.

Ambode said the additional Area Commands, if granted, would be set up in Ikorodu and Badagry, assuring that the state government was ready to provide the funds to set up the Commands.

“Funding is key to security, but security also is fundamental to the growth of Lagos and the prosperity of Lagos, so we are ready and we are committed to support all our security agencies, the Navy, the Police to make sure that we have a safe city where we can be investor friendly and also grow the economy of Nigeria.

“I am ready to fund additional area commands in Lagos, so I am requesting that we should do two additional commands in Lagos, one in Ikorodu and another one in Badagry. There is a need for us to pay more attention to the Ikorodu axis because of the kind of reports that we are getting from there,” the governor said.

Alluding to the multi-billion dollar investments coming up in the Lekki corridor and the need to secure the area, the governor also requested that the Mobile Police Command in Ibeju Lekki be relocated to Epe.

“We already have some kind of Command in Ibeju Lekki which is the Mobile Police, but I also request that because of the kind of economic activities that is coming up in the Lekki Free Trade Zone and the road expansion that we are doing in the Epe axis, we would like to request that the Mobile Command should be relocated to Epe itself,” he said.

Ambode, while thanking the IGP and the Acting President, Professor Yemi Osinbajo for their interventions in securing the release of the six kidnapped Igbonla Model College students, said the incident clearly showed the need to beef up security in the riverine borders between Ondo, Ogun and Lagos States.

He said the South West Governor’s Forum in a recent meeting had resolved to set up a Joint Task Force on security to stop criminals using the waterways as an escape route, just as he sought the support of the IGP towards ensuring the success of the initiative.

While pledging the commitment of the state government to provide additional gun boats and equipment to safeguard the waterways, Ambode also revealed that his administration has already concluded plans to procure a surveillance aircraft with the capacity to deal with all forms of crimes on the waterways, assuring that the government would spare nothing to ensure that the State remains safe and secured for residents and investors.

“In addition to that, we commit ourselves also to provide additional Hilux vehicles and personnel also so that with the joint task force, we can actually clean up our waterways. I’ll like to also let you know that we are also in the process of procuring a surveillance aircraft that can actually deal with issues that relate to our waterways.

“I am in total agreement with the IGP that there is a need for us to create a marine post along our waterways which you are already looking at, we must create some kind of outpost between Ondo, Ogun and Lagos so that these criminals cannot come into Lagos. The peace of Lagosians is of paramount to us so that we can checkmate them before they enter into Lagos we are also ready to fund that and then make sure that we train all our personnel and then seek the support of the Navy.

The governor also commended the IGP for his efforts in improving security across the country, especially in Lagos, noting that since he came on board, security in the State has greatly improved.

Earlier, IGP Idris Ibrahim commended the governor for his tremendous support to the Police Command in the State especially in providing equipment and welfare for officers, saying that Lagos was leading the way in matters pertaining to security, especially through its innovative Security Trust Fund which had become a national model.

“Lagos has been a pacesetter in various areas. You have been very dynamic. First you are the first government to introduce the Security Trust Fund and this is a concept we are trying to introduce nationally. We have the Police Trust Fund bill before the National Assembly, a public hearing has been heard on this bill and we believe it will be one of those instruments to change the face of policing in Nigeria,” Ibrahim said.

He said the Police was working out modalities to enhance their activities in the State especially in the coastal areas, saying that about 10 additional gun boats would be procured, while the Nigeria Police Marine would be enhanced to man the boats along the waterways.

“I believe with these enhancements and with the capacity to provide these gun boats, the Nigeria Police Force will effectively check these criminal activities and ensure security in Lagos and other areas,” the IGP said.

On the request of the Governor to set up two additional Police Area Commands, the IGP said the plan was already ongoing to increase Area Commands across the country to improve security surveillance and adequately address crime.