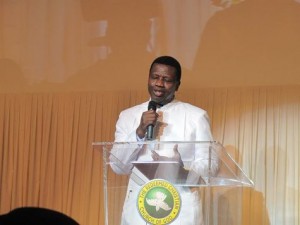 Residents of Ogun State and its axis will have less to worry about traffic as, 150 operatives have been deployed to control strategic locations in the state by the  Ogun State Traffic Compliance and Enforcement Corps (TRACE), ahead of the Redeemed Christian Church of God (RCCG) Annual Convention on Aug. 7.

Mr Babatunde Akinbiyi, the Public Relation officer of TRACE, said this in a statement on Saturday in Ota, Ogun.

According to him, the Mountain of Fire and Miracles Minsteries (MFM) programme will also start on Aug. 13.

Akinbiyi said that the 150 operatives would be deployed along the Lagos-Ibadan Expressway, Sagamu-Ijebu-Ode Expressway and the Ijebu-Ode-Ore Expressway to ease the free flow of traffic.

He said that the full strength of the Corps’ Akute, Sagamu, Mowe-Ibafo, Ogere, Ikenne and Ogbere Divisional Commands would be available during and after the one-week long programme.

”We envisage a high volume of human and vehicular traffic, breakdown of ill-maintained vehicles, obstruction and reckless driving by overbearing drivers along the expressway.

”Nevertheless, the corps is prepared to meet the challenge these religious activities may likely pose toward effective traffic control and for the safety of road users,” he said.

“The Corps, however, wishes all worshippers a rewarding and fruitful religious exercise during the programme.

”We also enjoin all motorists plying the axis to be safety conscious and avoid driving in a direction prohibited by traffic law.

”Give consideration to other road users and ensure strict compliance to traffic rules and regulations in the interest of all,” he said.