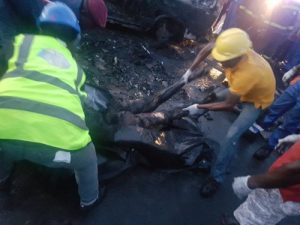 The Federal Road Safety Commission (FRSC) has confirmed the death of three persons, a male and two females, who were involved in an auto accident on the Auchi-Okene axis of the Benin-Lokoja road on Saturday morning.

This was made known by the spokesman of  Mr Bisi Kazeem, confirmed the incident in an interview in Abuja.

Kazeem said that 50 others, including a child, were injured and had been taken to the hospital for treatment.

“The crash occurred at about 4 a.m. at the Sharp Corner Checkpoint on the Okene end of the road.

“It was caused by brake failure. A FRSC rescue team arrived at the scene 20 minutes later and took the injured and corpses to the General Hospital in Okene (Kogi),” he said.

Kazeem reiterated FRSC’s advice to motorists to regularly check their vehicles and ensure they were road worthy before putting them on the highway.

Why Nigeria Should Reduce Cost Of Governance —Osinbajo