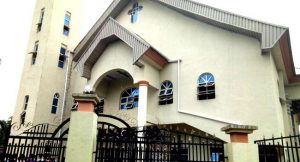 11 persons have been confirmed dead at the attack by some gunmen on St. Philips Catholic Church, Ozubulu, in the Ekwusigo Local Government Area of Anambra State on Sunday.

President Muhammadu Buhari, the President of the Senate, Bukola Saraki; the Deputy Senate President, Ike Ekweremadu, Speaker of the House of Representatives, Yakubu Dogara, Anambra State Governor, Willie Obiano, Governor Ifeanyi Okowa of Delta State; the All Progressives Congress; the Peoples Democratic Party; and the South-East Governors’ Forum said the act was sacrilegious, calling for prompt action to bring the culprits to book.

The gunmen attacked St. Philips Catholic Church at about 6am.

No fewer than 11 persons were said to have been killed, while over 18 people were reportedly injured.

it was  gathered that two sons of the community, who were based in South Africa, had a business transaction that went sour.

One of them was said to have built two churches for the community, including the one that was attacked on Sunday.

A police source said about six gunmen came to the church, while one entered into the building.

He said, “We received reports that over 30 Ozubulu indigenes based in South Africa had been killed over a disagreement between a man, identified as bishop, and his fellow Ozobulu indigene. It was said that the feud concerned a failed business deal.

“We understand that some gunmen had been after bishop and his men in South Africa and about seven of bishop’s men had been killed.

“At about 6am this morning (Sunday), some men invaded St. Philip Catholic Church.

“As of 9am, 11 persons were already dead, including the father of the man that allegedly built the church.

“The men killed the father since the son is elusive.”

Another source said  that the gunmen identified a particular car parked on the church premises and concluded that their target was in the church.

“They arrived at the church during the first mass and one of them went inside; he started shooting towards the direction he believed the father was seated. He shot indiscriminately and many bullets hit innocent members of the congregation. He also hit their target – bishop’s father.

“No fewer than 18 worshippers were injured; and I am sure that about 11 persons were killed.”

He said the injured worshippers were rushed to the Nnamdi Azikiwe Teaching Hospital, Nnewi, while corpses were taken to a “nearby mortuary.”

He said the six gunmen left the church unchallenged.

The Commissioner of Police in the state, Mr. Garba Umar, said the command would bring the attackers to justice.

Umar, who spoke at a news conference in Awka on Sunday, said the police had a record of 11 deaths, while 18 persons were injured.

He ruled out the possibility of a terror attack, adding that the command had invited some suspects.

He said, “The intelligence report and preliminary investigation showed that the incident was as a result of a feud between two individuals from the same community living outside Nigeria.

“One of the individuals built the church where the shooting occurred; it is not a terrorist attack.”

The Catholic Diocese of Nnewi, Anambra State, said the attack was regrettable.

The church in a statement by the Director of Communications for the Diocese, Rev. Hygi Aghaulor, said the Parish Priest, Rev. Fr. Jude Onwuaso, escaped unhurt.

It read in part, “What on earth would make people open fire on innocent unarmed worshippers, including children and women, on a Sunday morning?

“We condemn this ungodly act in its totality. For the parishioners, we call on them not to be discouraged in their practice of faith.”

The Anambra State governor, who visited the church, described the act as a sacrilege and unacceptable.

Obiano promised to offset the medical bills of injured victims, adding that the government would find ways to mitigate the pains of those who lost their beloved ones.

He said, “The Anambra State will not rest until the perpetrators of the killings are brought to justice.

“Intelligence report linked the shooting to an existing feud between some members of Umuezekwe Ofufe Amakwa community living abroad.

“It is an isolated case and I urge residents to go about their normal activities.”

He also said 50 doctors had been mobilised to the hospital to assist in providing medical care.

The News Agency of Nigeria reports that the governor also visited Our Lady of Assumption Catholic Cathedral, Nnewi, where he addressed a congregation of worshippers.

The Parish Priest of St. Philip’s Catholic Church, Rev. Fr. Jude Onwuaso, told NAN that the attack took place at about 6.30am.

He said, “An unidentified man came into the church, shot at a man, Chief Akunwafor Ikegwuonwu, before shooting indiscriminately at other worshippers.”