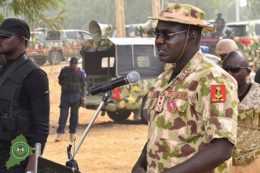 It was a day to honour hard-work as  65 Nigerian  soldiers were decorated with gallantry medals by the Chief of Army Staff, Lt. Gen. Tukur Buratai for outstanding performance in the counterinsurgency campaign.

Kingsley said that Buratai had on Tuesday decorated two officers and 63 soldiers in recognition of their prowess.

“Two officers and 63 soldiers serving under the 151 Task Force Battalion, 21 Brigade Nigerian Army, Operation LAFIYA DOLE, were decorated for their gallantry and bravery in the face of the enemy.

“On 10th July, the soldiers came under Boko Haram insurgents’ attacks on two separate occasions, but they were able to manoeuvre their way out of the ambush.

“They engaged the insurgents, inflicting heavy casualties on them and also recovered weapons, Improvised Explosive Devices (IEDs), gun trucks and logistics,” he said.

Kingsley quoted Buratai as describing soldiering as a call to national duty, and tasked the soldiers to rededicate themselves to duty to weed out remnants of Boko Haram insurgents.

“Buratai tasked the soldiers not to rest on their oars but conclude the fight against Boko Haram Terrorists and return to barracks to continue with training and other routine duties”.

According to the spokesman, Buratai also visited military formations at Awulari along Bama Road, and inspected the test firing of an artillery weapons by 304 Artillery Regiment.

He added that the Chief of Army Staff earlier on Monday, visited 25 Task Force Brigade, 7 Division Nigerian Army, in Damboa and also inspected the training of troops of Mobile Strike Teams at Buni Yadi, Yobe State.

“The Mobile Strike Force is due to be injected into Operation LAFIYA DOLE to enhance a more robust clearance operation against the remnants of Boko Haram terrorists in the North-East”.

Others were Brig. Gen. Ibrahim Yusuf, the Acting General Officer Commanding 7 Division, as well as other Principal Staff Officers and Directors from the Army Headquarters.

The Chief of Army Staff in compliance with the directives of the Acting President, Prof Yemi Osinbajo, to service chiefs, returned to the Theatre and had been visiting military formations under Operation LAFIYA DOLE.