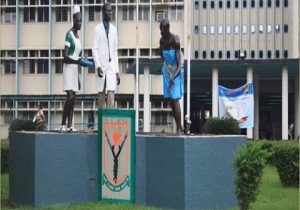 Three Lagos State Teaching Hospital  workers,have been tested  positive for Lassa Fever, there were said to have heard  contact with a pregnant woman who died of Lassa fever at the hospital.

LUTH’s Chief Medical Director, Prof. Chris Bode, confirmed this at a joint briefing by the hospital’s management and  officials  of the Lagos State Ministry of Health on Wednesday.

Bode said the health workers had been admitted to the Isolation Ward at the teaching  hospital alongside  a female resident doctor who contracted the infection  while conducting an autopsy  on one of the index cases.

The CMD also identified the second patient who died of the disease at the hospital as a sickle cell patient that was admitted on August 5.

He added that the victim had just come in from a neighbouring state.

According to him, all the other 97 contacts are still under surveillance.

Bode said, “Three of the persons who have symptoms are receiving  treatment at the Isolation Ward. They are being cared for by a group of professionals, volunteer doctors, epidemiologists, microbiologists, emotional caregivers and cleaners round-the-clock.

“And I want to assure the concerned public that they are responding well to treatment. This current outbreak is effectively being monitored. Those that are being monitored have been given  thermometers to check their temperature. So, let us douse the panic.”

Also at the briefing, the Director, Diseases Control, Lagos State Ministry of Health, Dr. Eniola Erinosho,  said the state government  had taken charge of the body of the first victim from the family  and had taken necessary guidelines in the disposal of the body.

Erinosho said the private hospitals where the victims had visited before they were referred to LUTH had been placed under a 21-day surveillance.

He noted that the Lagos State Ministry of Health had directed its Epidemiology Unit to move into LUTH.

“We are on top of the situation and there should be no panic. The index case was referred from Divine Grace Hospital, Imota, in the Ikorodu area of Lagos. We have been  there and have taken charge of the situation, but none of the people there has actually come down with the fever.

“We have about 22 people there. Today is the 14th day of monitoring and we hope that in the next seven days they will be discharged from the monitoring list. At present, we have two suspected cases at the Mainland Hospital but they are under control.”

Erinosho also said that the state government would take over the second corpse in possession of LUTH, while the first victim had been moved to Ilesa, Osun State,  in order for the officials there to dispose of the body according to international standards.

He said, “We have been to the house of the late patients and hospitals where they were first admitted. All arrangements have been made to bury the corpse based on international standards.

“In a case like this, we use body bags and we seal the coffin and the relatives will not see the body. From there, we have a special unit in the ministry called the State Environmental Monitoring Unit, which carries out the procedure.”

Erinosho, who advised Nigerians to keep their foodstuffs away from rats, however, urged them not to panic as Lassa fever, according to him, is a curable disease whose treatment is readily available in the country.

Meanwhile, the Special Adviser to the Governor on Primary Health Care, Dr. Olufemi Onanuga, in a statement issued by the LSMOH, confirmed that laboratory results of the two suspected cases at the Mainland Hospital, Yaba, were negative.

Onanuga said the two patients were referred from the General Hospital, Lagos, and a private hospital in Imota in Ikorodu.

Lassa fever is an acute febrile illness, causing bleeding and death in severe cases. It is spread by rats.