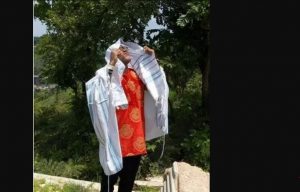 The Biafra Independent Movement ( BIM ), and the Movement for the Actualisation of the Sovereign State of Biafra, ( MASSOB ) have sent stern warning  the leadership of the Indigenous People of Biafra, Nnamdi Kanu to stop disturbing the South-East zone with it activities.

They argued that by his call for the boycott of the Anambra State governorship election, the IPOB leader, Nnamdi Kanu, was planning to force the Federal Government to  declare a state of emergency in the state.

BIM  said Kanu and his secessionists group, did not have programmes that would lead to the emancipation of the geopolitical zone but was only imitating programmes like sit at home and street rallies which it said  had long been carried out by MASSOB to seek undeserved relevance and popularity.

At a press briefing in Owerri, the Imo State capital on Thursday, the Elders Council of BIM led by its spokesperson, Chief Emmanuel Akabekwe, said that the calls by IPOB for the boycott of the Anambra State election was not in tandem with the call for a Sovereign State of Biafra which it said that the MASSOB leader, Ralph Uwazuruike, was committed to.

Akabekwe, who was flanked by Okechukwu Nwaogu, Kingsley Ezeugo and Rev. Linus Anya, said, “BIM condemns in strong terms the no election order in Anambra State by Mr. Nnamdi Kanu and his IPOB group. The order does not in any way conform to any agenda needed to realise Biafra but only has the capacity of creating violence, unnecessary tension, anarchy and enthroning emergency rule in Anambra State. “

According to him, Uwazuruike will have long issued the no election order in Anambra State and other South-East states if the order had anything to do with the struggle for the realisation of a Sovereign State of Biafra or would benefit the geopolitical zone.

He said, “Who is Nnamdi Kanu to speak for the Igbo people? He has no capacity to give order that will stand in Igbo land. He is only trying to grab cheap relevance and popularity with the Biafra agitation.

“…We therefore call on every eligible voter in Anambra State to come out en mass without any fear of molestation and exercise their franchise by voting in candidates of their choice. That is their civic responsibility.”

Also, the Delta State chapter of MASSOB and BIM called on Kanu to urgently withdraw his order directing voters to boycott the November 18 governorship election in Anambra State.

MASSOB also explained that the group’s call on Kanu to withdraw his election boycott order had become important to avoid plunging the state into bloodbath and fresh crisis during the poll in the interest of the Igbo nation.

The Delta South Zonal Chairman of MASSOB/BIM, Mr. Patrick Agwulobi, at a news briefing in Warri on Thursday, appealed to Kanu to withdraw the threat ahead of the poll to enable the people of the state to vote for the candidate of their choice.

Agwulobi said although IPOB and MASSOB were both pro-Biafran groups, the order by Kanu that Anambra people should boycott the exercise was unfortunate and did not enjoy the blessing of MASSOB members and was not  in the interest of peace.

He noted, “Our idea is that we don’t want anything that will bring problem or crisis. IPOB should withdraw the statement that ‘there will be no election.’ We are also saying that let us embrace the forthcoming election in peace. Kanu should retract the threat to avoid conflict or anything that will throw Anambra State into crisis.

“MASSOB/BIM is therefore encouraging all her members in Anambra State as whole to come out en mass and be fully involve to vote the leader of their choice to enhance democracy and development in the state.”

Agwulobi, while disassociating MASSOB from the boycott order, said, “He (Nnamdi Kanu) should know that boycotting the election would bring crisis or conflict, and we in MASSOB, do not support such threat. If he refuses to withdraw the statement, he will face the consequences alone with his supporters.”

He added that the group would mark its 18th anniversary celebration of the movement in September, this year.

The group also added that a new Biafra radio would be inaugurated during the period of the celebration.