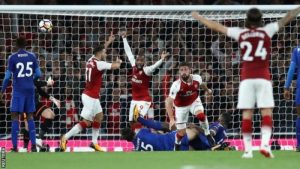 Beautiful header from Olivier Giroud ensured the Gunners beat Leicester City in a thrilling start to the 2017-18 Premier League season.

The Gunners trailed 3-2 with seven minutes to go before Aaron Ramsey and Giroud swung the game back in the home side’s favour at a euphoric Emirates Stadium.

Alexandre Lacazette headed the Gunners ahead 94 seconds into his top-flight debut, only for Shinji Okazaki to nod in an equaliser just two minutes later.

Vardy then slid the visitors ahead from Marc Albrighton’s cross, before Danny Welbeck drew Arsenal level at the end of a pulsating opening half.

Substitute Ramsey smashed in an angled drive – from a corner which was won after Mesut Ozil handled in the build-up – before Giroud showed athleticism and strength to meet Granit Xhaka’s corner.

Many observers may have thought Giroud’s days at Arsenal were numbered following the arrival of fellow France striker Lacazette from Lyon for a club-record £46.5m fee.

Wenger revealed after Friday’s win that Giroud, who has scored 97 goals in 231 appearances since joining from Montpellier in 2012, could have left the Gunners this summer.

“At one stage I opened the door for him as I knew I had many strikers, and in the end he decided to stay,” said Wenger.

“He doesn’t want to leave and I’m happy he wants to stay.”

And the 30-year-old proved his worth with another vital goal after coming on as a substitute – but is hoping for a more substantial role at the club.

Since the start of last season, Giroud has scored seven Premier League goals coming off the bench – three more than any other player in the same period.

He said, “I prefer to be on the pitch as much as I can but I want to help the team reach the targets.”