Nigerians took to Twitter to attack the former Vice President of Nigeria, Atiku Abubakar when a picture he posted of himself eating with IDPs Children went viral.

This is what Nigerians had to say;

Be it corn eating on the street, patronizing Bole sellers, frying akara balls, we are tired of the campaign strategies employed by politicians to strike emotional connections with the electorates during political campaigns. This time they are say “Our Mumu Don Don Do!”

However, this particular photo of former Vice President Atiku Abubakar eating with children was taken early 2015 at an IDP camp in Yola, Adamawa state.

Atiku has however, debunked claims that it was all a strategy for 2019 elections. His tweets below: 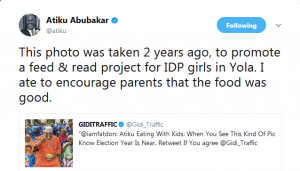