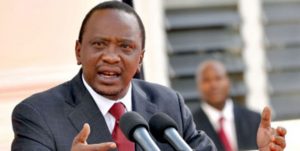 Former Nigerian President, Olusegun Obasanjo, has sent a  congratulatory message to  Uhuru Kenyatta on his re-election as the president of Kenya.

The letter, dated August 12, 2017, noted that last Tuesday’s election in the East African country is not devoid of “some elements of push and pull” associated with recent elections in the continent.

He however said rather than see these issues as challenges, they should be used as an opportunity to “bind the wound and to unite a country divided by the electoral process.”

“All friends of Kenya were anxious that there should be no similar violence that followed the election in 2008. So far, so good and thanks to God,” Mr Obasanjo, a two-time head of state of Nigeria wrote.

“May I crave your indulgence to suggest that for stability of democracy in Kenya and for the interest of the people of Kenya as a whole, that the allegations of manipulation of results in the process of transmission should be thoroughly investigated with an appropriate measures taken to ensure integrity of future elections, as may be necessary,” he added.

Pockets of violence have erupted after Mr kenyatta was declared winner of the election having scored 54.3 percent of total vote cast.

No fewer than 10 people, including a child, have been shot after protesters took to the streets.

The country’s opposition has rejected the result calling it a “charade” and a “disaster.”

“We are not going to be party to it. Our issues have not been addressed. One can conclude they [electoral commission] are not keen on taking our concerns seriously,”said Musalia Mudavadi, a senior official of the opposition National Super Alliance (NASA) and former Kenyan vice president.