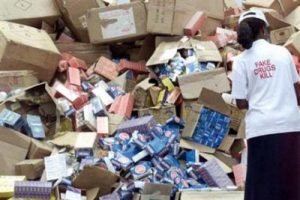 The National Agency for Food and Drugs Administration and Control ( NAFDAC ) has destroyed Fake, expired drugs and other adulterated confectioneries worth N3bn.

This  was made known by the Acting Director-General of the agency, Mrs. Yetunde Oni, who spoke at the destruction site in Sagamu, Ogun State, said that NAFDAC had convictions for 64 cases of counterfeiting across the country.

Oni said the judgements ranged from one to seven years imprisonment without option of fine.

Oni who was represented by the Director of Investigation & Enforcement Directorate, Mr.Kingsley Ejiofor, however, noted that the progress recorded came as a result of collaborations with sister agencies.

“The Nigeria Customs Service intercepted and handed over seven container-load of  drugs worth about N35m to the agency. Other stakeholders such as the Association of Community Pharmacists of Nigeria and the Lagos State Medicine Dealers Association are highly appreciated for voluntarily mopping up and handing over expired products for destruction,” Oni added.

Ejiofor in his address described faking of NAFDAC regulated products as an act of economic sabotage and ‘terrorism’ against the public.

He said, “We have increased surveillance and enforcement operations at our ports and borders and routes used by smugglers and this has led to increased seizures of fake products.”