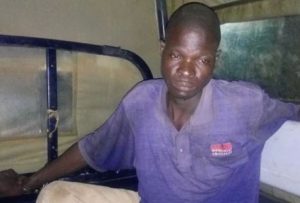 The Police has arrested a man  in Kabuchai Constituency, Bungoma County while burying his mother alive following a land dispute between both parties.

According to Residents of Siuno village in Kabuchai constituency responded to distress cries from an elderly woman on Thursday, August 24, when they found her being buried alive in a pit latrine that was halfway dug by her son. Mr. Chris Wamalwa.

Daily Nation reports that Wamalwa was angry at his mother, Beatrice Nasaka, after she sold a piece of land that he was hoping to inherit. In a protest towards the decision, he decided to bury her alive in broad daylight.

Narrating what led to the wicked act, the traumatised widow who was rushed to Bungoma County Referral Hospital after she was saved, said her son wanted to bury her alive after she declined to give him a share from a piece of land she had sold.

“I’m a widow and my only property will save me from poverty. I had sold a piece of plot so that I can use the money for my personal needs but when my son heard of the sale, he rushed to my home and demanded a share. He attempted to bury me after he failed to get what he wanted,” claimed the victim.

The 40-year-old man was handed over to the police by an elder in the village.