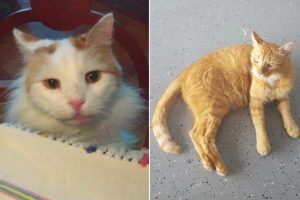 A woman identified as Ellen Frey-Wouter left a sum of money to her own kitties – $300,000, out of a $3million estate which is approximately 113 million naira. According to reports, the deceased who died at the age of 88, left the fund for the upkeep of her cats for the rest of the days on earth.
Further reports revealed that Frey-Wouter’s husband, a Brooklyn College professor passed away in 1989, and the couple’s only child died in infancy.
The New York Post says Tiger and Troy are now being cared for by Frey-Wouters’ former house nurses who submit the bills for expenses like food, grooming and vet care which are then reimbursed from that trust fund.
The Netherlands native who worked for the United Nations, died in 2015.
Source: ( Naij.com )
AdvertisementClick Here To Join The 10,000 Naira Giveaway For 100 People!