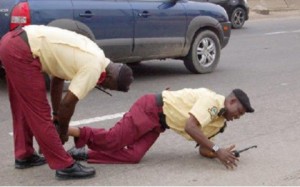 The Zonal Commander of the Lagos State Traffic Management Authority, LASTMA, in charge of Victoria Island and its environs, Alabi Olukayode Ola was attacked by a driver identified as Adu Gbenga  for arresting him for traffic offence, the suspect has been arraigned before a Lagos Magistrate Court.

It was gathered that the timely intervention of the Divisional Police officer, DPO in charge of Bar Beach Division, Victoria Island, Lagos CSP Olusegun Ajamolaya saved the LASTMA officer from being killed by the accused persons as he reportedly dispatched a team led by Inspector Ganiyu Mustapha to the scene of the fracas to restore order following a distress calls by the victims and arrested the driver and two others while others escaped.

After investigation, the three were arraigned before an Igbosere Magistrate Court, Lagos on a two-count charge of felony to wit. assaulting a LASTMA officer on lawful duty.

Police prosecutor, Oluwafemi Adeleye informed the court in charge No. J/50/2017 that the accused persons committed the alleged offence on 18 August, 2017 at 1004 Estate Bustop, Victoria, Lagos.

Adeleye told the court that the complainant arrested the driver for opening the door of his bus on the highway and allowed his conductor to hang instead of sitting down inside the bus.

He said that instead of the driver being remorseful of the offence, he, instead called about five suspected hoodlums who arrived the scene and descended on the LASTMA commander and beat him.

Adeleye said that while the fracas was going on, the complainant managed to send a distress call to the police who arrived the scene to arrest the driver and two of the suspected hoodlums while others escaped.

He said that the offence the accused person committed were punishable under section 409 and 170 of the criminal of laws of Lagos State, 2015.

The accused persons pleaded not guilty to the alleged crime in the open court and magistrate Mr. O.O Owunmi granted them bail in the sum of N100, 000 each with two sureties each in like sum.

Owunmi adjourned the case till 14 September, 2017 for mention while the defendants were remanded at Ikoyi Prison, Lagos pending when they are able to fulfill their bail conditions.

Other suspected hoodlums charged with him for the same offence were Tochukwu Obiora, 38 and Emmanuel Okoi, 24.