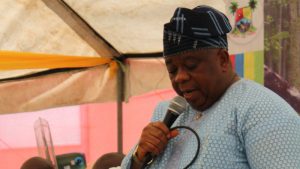 Residents living along the plains of Ogun River has been advised by the Lagos State Government to be on the alert and take necessary precautions as the management of the Oyan Dam has begun seasonal water releases from the dam.

According to the Commissioner for the Environment,  Dr. Samuel Babatunde Adejare, explained that the controlled water releases from the dam was a pragmatic approach of the Ogun-Oshun River Basin Development Authority to prevent overflow and possible integrity failure of the Oyan Dam which could spell doom for people around the catchment of the river basin as it portend danger to lives and property, especially to the people living along the plains of the Ogun River in Lagos State.

Adejare made this known in Alausa on Monday, during a chat with the media.

Adejare stressed that the controlled release of water from the Oyan Dam was the outcome of the collaboration between the Lagos State Government and the Ogun-Oshun River Basin Authority to forestall possible collapse of the dam.

“The controlled water releases have become expedient as a result of the weather forecast and the continuous heavy rainfall which is likely to resume later in the month”, he said.

He, therefore, advised those residing along plains of Ogun River in Lagos State such as Ajegunle, Owode-Onirin axis, Owode-Elede, Isheri North, Ogolonto, Irawo and so on to be extremely careful and take precautionary measures which may include vacating their residences temporarily.

He urged people in these areas not to hesitate to move to higher grounds once they notice gradual accumulation of rising water as the State is not ready to lose any life during the period.

The commissioner stressed that this advice must be re-echoed before the rain begins so that the concerned people could always be on the alert.

He also emphasised that primary and secondary channels in the State were being maintained and dredged to contain flood related challenges that might occur in the State.

Adejare advised Lagosians to be safety conscious during this period and urged them to take some safety measures like avoid going out during the rains except only when it is absolutely necessary.

“Be conscious when driving and do not over speed. Ensure that your vehicles are in good condition; and avoid driving through flooded areas as it might be difficult to ascertain its depth,” he said.

He assured that the state government would continue to intensify efforts geared at achieving the zero tolerance to flooding in Lagos State.