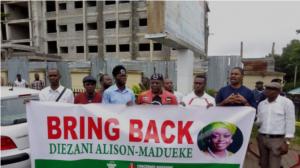 Charles Oputa popularly known as Charly Boy, led a protest to the headquarters of the Economic and Financial Crimes Commission, EFCC, in Abuja on Monday to demand the extradition of former minister of petroleum resources, Diezani Alison-Madueke, from the UK to Nigeria.

Mrs. Madueke is currently standing trial in Nigeria and the UK for alleged misappropriation of the nation’s funds while she held sway as minister during the immediate past administration.

Two weeks ago, Charly Boy led a series of protests to demand that President Muhammadu Buhari either resume office or resign.

The protests which led to chaos at the popular Wuse market in Abuja perhaps made Mr. Oputa to suspend further rallies.

The EFCC, while receiving the protesters, said it would follow the rule of law to the letter in treating the case against Mrs. Madueke.

In a statement issued by the Secretary to the Commission, Emmanuel Aremo, the anti-graft agency said “it remained committed to the rule of law, as this was paramount in the fight against corruption.”

“Let us be patient and let us follow due process. We on our part will ensure that no stone is left unturned as we intensify the war against corruption,” he said. Mr Aremo urged the group, which also had an activist , Deji Adeyanju, present, not to relent in their support for the EFCC’s fight against corruption.