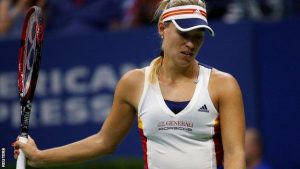 Japanese teenager, Naomi Osaka set up a major upset at the ongoing US Open on Tuesday as she dumped out defending Champion, Angelique Kerber in the first round of the competition.

Kerber was no match for the young Japanese who is ranked world number 45, as she lost 1-3 1-6 under the roof on Arthur Ashe Stadium at Flushing Meadows.

It continues a disappointing year for 29-year-old Kerber, who has not won a title since her victory in New York 12 months ago.

“I’m still the same player and the same person,” she said.

“I know that I will not be giving up like this. So for me, I will try to forget the match as soon as possible and look forward again.”

Osaka, who led Madison Keys 5-1 in the final set in round three of last year’s US Open before losing, said: “It means a lot, especially since last time I was here.

“This court has not given me fond memories but hopefully this overtakes that.

Two-time Grand Slam champion Kerber struggled badly with her second serve, winning only 37% of points behind it.

Osaka hit 22 winners to Kerber’s nine, while the German also made 23 unforced errors in an erratic display.

“She just goes for it,” added Kerber. “I think she took the chances and she played a very good match.