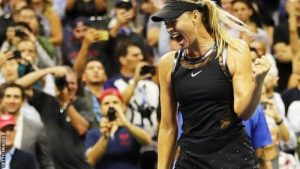 Wild Card, Maria Sharapova stunned the World  by knocking out world number two Simona Halep at the US Open.

This was Sharapova’s first Grand Slam match since serving a 15-month doping suspension.

The game lasted for two hours and 44 minutes, Sharapova’s greater pace off the racquet outstripped Halep’s speed of foot, with 60 winners proving decisive despite 64 errors.

“You never know what you’re going to feel until you win that match point, but everything you go through is worth it for this moment,” said Sharapova, who now has a 7-0 record against Romania’s Halep.

“You sometimes wonder why you put in all the work, and this is exactly why.”

Sharapova goes on to face Hungary’s Timea Babos, the world number 59, in round two on Wednesday.