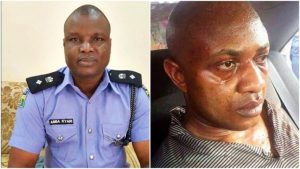 The Nigerian  police has announced that it  will arraign the notorious kidnapper, Chukwudi Onwuamadike a.k.a. Evans, today on a 52 count charges alongside his gang members at the Lagos State High Court.

According to reports, it has been  learnt that the charges bordered on murder, kidnapping, armed robbery and unlawful possession of firearms.

The source said, “Investigation into crimes committed by Evans has been concluded before the expiration of the 90 days remand order granted by the Federal High Court.

“Evan’s first case is the kidnap of Mr. Donatus Dunu in Ilupeju, Lagos whom he collected N150m ransom from. The case will be coming up in Ikeja High Court 18 before Justice Oshodi on Wednesday (today).

The source stated that the charges were prepared by the Force Legal Department and the Lagos State Directorate of Public Prosecutions before the state High Court and Edo State High Court Benin.

“Wednesday’s case is one of the 14 cases. Evans and five of his gang members who participated in Mr. Donatus Dunu’s kidnapping will be arraigned.

“The remaining 13 cases relating to 13 more victims and other gang members of Evans not yet arraigned will come up on subsequent dates that the respective high courts and Federal High Court will schedule,” he added.

However, the Lagos State Police Public Relations Officer, Olarinde Famous-Cole, confirmed that Evans would be arraigned before a Lagos State High Court in Ikeja on Wednesday (today).

The police on June 10, 2017, arrested the kidnap kingpin in Lagos after five years of trailing him.

Evans, a native of Anambra State, was arrested in his Magodo residence by the operatives of the Inspector -General of Police Intelligence Response Team.

Security forces said Evans had been responsible for many high profile armed robberies in the South-West and South-East parts of the country.

He was said to have collected billions of naira as ransom from his victims, including expatriates, business moguls and public office holders.

Meanwhile, the  Federal High Court in Lagos on Tuesday failed to deliver judgement in a N300m fundamental rights enforcement suit filed by Evans.

Justice Abdulaziz Anka did not deliver judgement after the Nigeria Police filed a fresh application.

At the Tuesday proceedings, the Police told the court that they did not authorise any counsel to represent the force in the case.

Counsel for the Police, Mr. David Igbodo, said he had brought a fresh application, stating that the police were not given a fair hearing in the case.

Igbodo, a Commissioner of Police in charge of Legal Section at the Force Headquarters in Abuja, represented the Inspector-General of Police and the Nigeria Police.

He noted that Mr. Henry Obiazi, who had previously represented the police, was not instructed to act on behalf of the IGP or the police.

“In the pending application which was filed on August 21, the police are praying the court to set aside all the purported arguments made by Obiazi in the case,” Igbodo said.

The police also prayed that the court should set aside the ruling delivered by Justice Anka on August 16 because the judge did not hear from the first and second respondents.

He further asked the court to grant the leave of the IG and the Police to file their counter-affidavits to the suit and for the court to consider their response duly filed and served.

“We believe, My Lord, understands the principle of fair hearing. We are ready to move the application,” Igbodo said.

He further faulted the claims of Igbodo that he evaded service of the application on him.

According to him, there is nothing before the court again after parties have canvassed their arguments and a date has been fixed for judgement.

“We have not been served with that application. On August 16, arguments were taken from all parties and Your Lordship graciously reserved today (Tuesday) for judgment.

“It is our strong view that this application was calculated to arrest the judgment.

“The assertion that we refused service of the fresh application cannot be true when judgment has already been reserved,” he said.

However, Justice Anka objected the claim of Ogungbeje, stating that he could not go on with the judgment in the face of the fresh application.

He adjourned the case until September 5 for hearing.