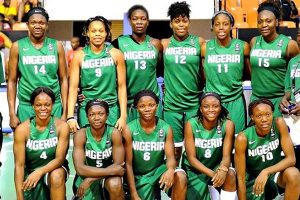 Mr. Dalung who disclosed this during a reception for the new African women basketball champions at the Abuja National Stadium said Wednesday’s ceremony would be in further appreciation of the team.

The senior national women basketball team had on Sunday won the 2017 FIBA Women’s AfroBasket Championship at Bamako in Mali after beating defending champions Senegal in the final match.

“Becoming Women’s AfroBasket champions after 12 years is an achievement worthy of celebration.

“Winning the African Championship for the third time establishes you (Nigeria) as a force to reckon with in African basketball.

“I am convinced that this will boost your confidence to perform well at the World Championship in Spain in 2018,” Mr. Dalung said.

The minister said the victory helped to underline his belief that “when we do things the right way, we will always get the right results’’

Mr. Dalung recalled that he and the ministry came under a lot of criticism when they embarked on some reforms.

“However, getting the governance structure of National Sports Federations right was key to success in sports,” he said.

Earlier. the President of the Nigeria Olympic Committee, Habu Gumel, had praised the team for its performance, pledging his support for the team.

“I look forward to seeing the team perform better at the World Cup in Spain in 2018.

“But I will advise you all to continue training to maintain this quality standard of play at the World Cup,” he said.

The President of the Nigeria Basketball Federation, NBBF, Musa Kida, while presenting the team to Mr. Dalung, had said passion, hard work and commitment helped the team to win the competition.

He, however, assured that the NBBF board would make grassroots development its priority.

Also speaking at the occasion, D’Tigress captain, Aisha Muhammed, thanked the minister and the board for the support given to the team.

She said this and the prayers of other Nigerians helped the team a lot.

The News Agency of Nigeria reports that the team had beaten all its five opponents in the competition’s group stage to qualify for the quarter-finals.