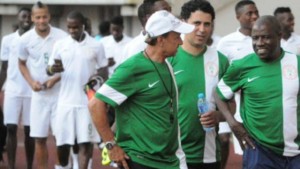 Super Eagles, technical adviser Gernot Rohr, has expressed excitement  over the commitment of the players in camp ahead of the crucial 2018 World Cup qualifying double-header against Cameroon but has admitted that he has a headache selecting his starting XI.

He said, “It is a big match and we are fully focused and committed. The players know what it means; they need little or no reminding of how important this match is. I am happy we have almost the full house now and can concentrate on our tactics for the game,” Rohr stated.

On his squad for the encounter, the former Niger gaffer added, “We had all the players in for our first training. It was a good training, everybody was fit, no injuries and now it will be difficult for me to choose the starting XI because everybody wants to play,” he told reporters after the training in Uyo.

“But hopefully after tomorrow’s (Wednesday) training, which will be closed to journalists, I will have in my mind the team to start this important game against Cameroon.”

Rohr is hoping for a win on Friday after key players joined up with the squad on Tuesday.

“Cameroon are the champions of Africa, they did not have an easy Confederations Cup, but they play as a team. They are a good team, we also have a good team and we can beat them. It will be a physical game because Cameroon are very strong physically.

“We had a very young team in our last game (against South Africa in June), an U-23 team, but now we have our experienced players back – our captain (Mikel), our best striker (Victor Moses) and defender (Leon Balogun).”