Home National News See what a man did to his friend who introduced him to...
Facebook
Twitter
WhatsApp 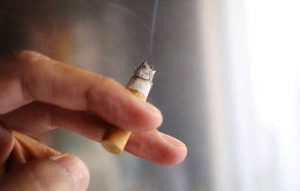 An Indian man identified as Mustakeem Ahmad, killed his friend who introduced him to cigarettes after he was diagnosed with throat cancer.

Ahmad who was arrested on Friday told detectives that he purchased a pistol and practiced firing it to ensure he killed the victim, who had been working at the restaurant for 18 months.

“Though Ahmad and Inayat were friends at the workplace, Inayat was reportedly better at his job and well-behaved and soon became the favourite of the restaurant owner,” said deputy police commissioner Sibesh Singh.

According to the Hindistan Times, Ahmad started smoking cigarettes and marijuana under the influence of Inayat which led to his throat cancer.

Ahmad blamed his colleague for his cancer and tried unsuccessfully to get him sacked from his job, he added.

After his work performance deteriorated Ahmad was fired and investigators said he returned to his native village of Amroha in Uttar Pradesh, where he bought a gun and some cartridges.

“He first practiced firing in his village, before returning to Delhi a few days ago,” said Mr. Singh. “He was carrying his loaded pistol to the restaurant and had planned to kill Inayat if he failed to get him fired from the job. That is what eventually happened. Ahmad ended up picking a fight with Inayat. He later shot at him in the middle of the argument,”

The deceased was rushed to the hospital but died of his injuries.