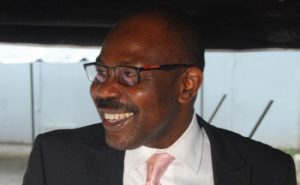 The Mushin (Ilasamaja Ward C) Disciplinary Committee of the All Progressives Congress, APC, that heard a petition accusing a party chieftain, Muiz Banire, of anti-party activities, on Wednesday submitted its report, recommending his suspension.

The News Agency of Nigeria reports that the committee, on August 14, had conducted a hearing on the petition written against Mr. Banire by two party members of his ward, Olukayode Tolu and Ayodele Adebayo, on behalf of all members of the ward.

Mr. Banire, who was invited to the hearing, did not show up, but the committee had gone ahead with the exercise.

The petitioners had alleged at the hearing that the party chieftain engaged in acts that could undermine the integrity of the party.

They alleged that Mr. Banire dragged the party to court shortly before the July 22 council elections over alleged imposition of the party’s candidate in Odi-Olowo Local Council Development Area.

According to them, the action was intended to discredit the party before the election and jeopardise its chances.

They also alleged, among other things, that the party chieftain had not attended the party’s ward meeting for the past two years and had not fulfilled his financial obligation to the party.

The petitioners had prayed the committee to suspend him from the party for 10 years and not to allow him to take any position in the party again.

A former member of the House of Representatives and counsel to the committee, Wunmi Bewaji, had said the committee would examine all the allegations and come up with its report shortly after then.

Presenting the report to the party’s ward executive on Wednesday, chairman of the committee, Bolaji Abbas, said the panel had found Mr. Banire culpable of allegations against him after careful and thorough examination.

He said the committee had recommended in the report that Mr. Banire, who is the party’s National Legal Adviser, be suspended from the party for between five to 10 years.

“We have done our work, having examined the allegations levelled against him by party members at the ward.

“In our report, we recommend that he should be suspended from the party between five to 10 years.

“We are forwarding the report to the appropriate quarters for the necessary actions,” he said.

Receiving the report, the Ward Chairman of the party, Bolaji Amusan, said the ward executive would forward the report to the party’s local government executive for the necessary action.

“Yes, we have received the report today, but we will forward it to the party’s executive at the local government who will act on it,” he said.

NAN reports that the ward had, before the hearing of the petition by the panel, earlier announced the suspension of Mr. Banire over the same allegations.

The National Working Committee of the party had, however, nullified the suspension, saying the ward lacked the power to suspend a national officer.

Mr. Banire had also described his suspension as laughable, saying it was an orchestrated attempt at stopping him from entrenching internal democracy in the state’s chapter of the party.