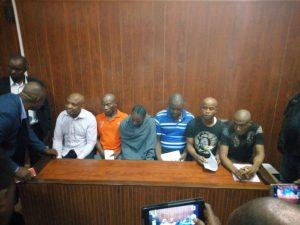 Billionaire kidnapper, Chukwudumeme Onwuamadike aka Evans, was arraigned before an Ikeja High Court where he pleaded guilty to the two count charges of conspiracy and kidnapping. His lawyer, Olukoya Ogungbeje, has however alleged that Evans was forced to plead guilty by the police. According to him, Evans told him the police asked him to plead guilty otherwise they would kill him.

In a statement released to newsmen, Ogungbeje said Evans who has been in police detention since his arrest on June 10th, was denied access to his lawyers. He said himself and his other legal team heard of his arraignment via social media as no letter was sent to them notifying them of their client’s arraignment.

“It must be noted that our client had been in police custody since 10th of June 2017 till date and his lawyer and family members have been denied access to him. His arraignment was brought to our attention through the social media platform. We rushed to court in a bid to confer with our client before the commencement of proceedings but the Police denied us access to him.

We sought for an adjournment to enable us to confer with our client in line with the provisions of Section 36(6) (2) of the Constitution but same was turned down by the court. Moreso, the information/charge sheet was served on us in open court on the same day of arraignment.

After the purported guilty plea of our client and the court rose, our client told us clearly that the police told him to plead guilty failing which the police will kill him. This is definitely unconstitutional and we intend to challenge this unconstitutional procedure of hoodwinking, unduly influencing, brainwashing and coercing an accused into entering a guilty plea against his wish and freewill. Our client pointedly told us that being informed now, he will change his ‘police motivated guilty plea’ to ‘not guilty’ at the next adjourned date.

It is settled law that plea of guilty must be made voluntarily and devoid of any influence, coercion, and manipulation. We have a responsibility to assist the cause of justice in accordance with the law,” the statement read