Home National News Nnamdi Kanu must to be re-arrested ( Find out who said so...
Facebook
Twitter
WhatsApp 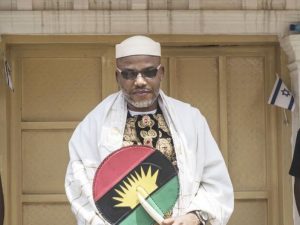 The Federal Government has been advised by the former military governor of Kaduna State, Colonel Abubakar Umar (retd), against re-arresting the leader of the Indigenous People of Biafra (IPOB) Mr Nnamdi Kanu.

In a statement he issued on Wednesday, the former military officer said such a move would be dangerous and politically unwise.

The former governor’s comments are in reaction to the motion on notice filed by the Federal Government at a Federal High Court last.

In the application, the government had asked the court to revoke Mr Kanu’s bail and order his re-arrest for violating the conditions of his bail.

But Umar prefers a different approach to the matter.

“Reports in the media indicate that the Federal government has asked the Federal High Court in Abuja to revoke the bail granted Mazi Nnamdi Kanu and have him re-arrested. This is both dangerous and politically unwise,” he said.
He added, “Nigeria’s unity can only be guaranteed when all its citizens feel they are given a fair deal; when all its component parts are treated justly and equitably. When none feels oppressed.”

The governor also spoke about calls for restructuring and the mood in the country.

“President Buhari’s insistence that the unity of Nigeria is a sealed issue is a nationalistic wish and is no surprise coming from a veteran of the civil war fought to keep the country one. However, this does not take into account the mood of the nation as indicated by the growing agitations for self-determination, restructuring and many other similar demands,” he said.

“If indeed the President is able to ignore and silence those agitators, it will be a case of suspended animation. All indications are that Nigeria has become so polarized that it requires a strong personality like Buhari to sustain its fragile unity. Needless to say that this does not bode well for the survival of the nation.”