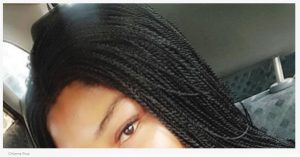 An undergraduate of the Federal Polytechnic, Nekede, Imo State,identified as Chioma Pius, who was allegedly tortured by some policemen attached to the Rivers State Police Command, has identified the patrol team behind the attack.

The victim, who spoke to Punch Newspaper  on Wednesday, said the matter had also been taken to the Public Complaint Rapid Response Unit of the Nigeria Police Force, Abuja.

She briefly recounted her experience with a four-man patrol team on the Elebrada Junction, in the Emohua area of Rivers State when she posted it on Facebook.

She had said the police team accused her of putting on tattoos on her body and assaulted her before locking her up in a mobile cell.

During a chat with PUNCH Metro, she explained that the cops had earlier checked the vehicle particulars and that of the driver of the cab she took and finding no fault, shifted attention to her.

She said, “The incident happened around 1.05pm on Monday. My friend was having her birthday and I left Bayelsa for Port Harcourt, Rivers State, to buy groceries for her. I was in the cab when we were stopped at a checkpoint.

“One of them asked for the driver’s vehicle documents, which he gave them. I was in the car, listening to music. When the officer saw that the papers were complete, he asked me to come down.

“I asked the cab man if he had any problem with them, and he said no. The policeman asked me to identity myself and I told him my name and that I was a professional fashion designer. I told him that I was also a student of a polytechnic. I was wearing a smile on my face. I never knew that people misunderstood smiling for arrogance.

“His boss came towards us and asked if I was resisting arrest. He said I was treating him as if he was too small to talk to me. The boss asked for my identity and I reintroduced myself.

“He said, ‘Oh, you even have a tattoo, and you are resisting arrest. Ok, detain her.’ I was shocked.  I said, ‘Oga, you can’t ask them to detain me for wearing a tattoo.’ He said I was proving stubborn. Before I could turn around, the other policeman had slapped me twice.

“He pushed me towards his boss, who punched me as if he was punching a man like himself. The next thing, they poured water on me and the man went to get a horsewhip and flogged me. The boss used his gun to hit me twice in the thigh. I jumped into the mobile cell. One of them bought a sachet of pure water and poured it on me, shouting ‘Ashawo’.He also spat on me.”

The Imo State indigene explained that the tattoos on her body had been imprinted for more than eight years, adding that while one was a tribute to a deceased sibling, the other represented important memories of her life.

She said when she asked to speak with her fiancé, an Italian, the policemen called her a prostitute, saying she would soon contract HIV.

“The policemen ransacked my handbag and wallet, looking for money.  They later sneered that I didn’t have any money but I had a sharp mouth to question them.

“Three of them beat me up, while the fourth officer was busy extorting money from other motorists, who watched me suffered,” she added.

She explained that the cab driver, who had been threatened with a gun for wanting to interfere, ran to another checkpoint to beg other policemen to mediate.

The policemen were said to have pleaded with the cops to release her, saying she had suffered enough.

“I want justice because I was humiliated publicly and treated like a child. They have probably been doing this to a lot of people, but it must end. I was not indecently dressed to have warranted any harassment. I wore a black jeans and a T-shirt. I don’t dress indecently outside. What if I had worn something transparent? Then I would have lost my life,” she added.

She gave the number plate of the patrol vehicle as NPF 4982C AKU PH, adding that she had already made statements to the PCRRU.

The Rivers State Police Public Relations Officer, Omoni Nnamdi, did not pick his calls when our correspondent contacted him.