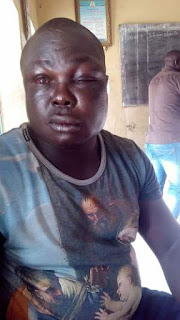 One Koko, who is notorious for extorting money from motorists and cyclists at Amuogodo Mudiagha area in Okirighwre junction, Sapele was brutally beaten by suspected cultists.

It was gathered that the victim was stopping a driver yesterday night around 11pm when some men numbering about five attacked him.

The cultists dispossessed the driver of his wallet before they descended on Koko and beat him to pulp, apparently taking far too much interest in his face.