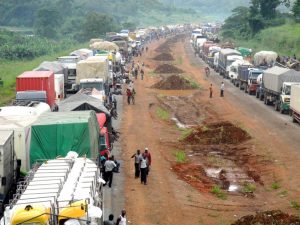 Armed Robbers attacked passengers on the popular Benin-Ore Road leaving a 53-year-old driver, identified as Suleman Tajudeen, with serious injury after he was shot in the head by suspected armed robbers.

It was gathered that the armed men, numbering about 10, had stormed the Ore-Benin highway at about 4.30am on Monday.

The suspected robbers were said to have barricaded a portion of the road in order to slow down vehicular movement and rob unsuspecting motorists and passengers.

It was learnt that Tajudeen, said to be a contract driver with Complete Communications Limited, publisher of Complete Sports Newspaper, had attempted to flee from the robbers when he was shot in the head.

The father of two and native of Abeokuta in Ogun State, who is currently receiving treatment at the male ward in the hospital, told PUNCH Metro that the armed men dispossessed him of N48,000 and a mobile phone.

He said the robbers thought that he had died from gunshot injury when they saw him in a pool of blood.

The injured driver, however, said he was later rushed to the hospital when his vehicle arrived at Benin.

Tajudeen stated, “I was driving towards Benin, between Ore and Ofusu, when I saw their (robbers) barricade. A driver with TheGuardian Newspaper, Mr. Kayode, was behind me.

“When I saw the barricade, I stopped. As I tried to reverse, they (robbers) shot and the vehicle stopped. One of the robbers said that I was dead.

“They dragged me out of the vehicle, searched me and stole about N48,000 and my mobile phone before they left. After they left, I managed to drive to Benin while blood was still flowing.”

Calls put across to the mobile line of the Police Public Relations Officer, Mr. Moses Nkombe, for comments went unanswered.

He had yet to respond to a text message sent to him as of the time of filing this report.

But the Benin sales representative of the company, Pastor Ayo Oiseomaoje, who confirmed the incident, decried the activities of armed robbers on the highway.

According to Oiseomaoje, robberies on the road, which is a major route to the South-South, had become a regular occurrence.

“The hospital initially advised us to go to the police to get a report, but we were told in Benin that the incident occurred in the jurisdiction of the police in Ore. However, at the end of the day, he was given medical treatment. He is still in the hospital,”  Oiseomaoje said.