Former President Barack Obama’s three-part tweet of a Nelson Mandela quote in the wake of the Charlottesville, Va., white supremacist rally that left one counter-protester dead is the most liked tweet ever, according to Twitter.

The tweet which amassed over 1 million retweets and 3 million likes denounced hate and called for love.

Obama’s first tweet featured a picture of him interacting with a few young children through a building’s window and read, “‘No one is born hating another person because of the color of his skin or his background or his religion…'”

The 44th President finished the quote in his next two tweets. He wrote, “‘People must learn to hate, and if they can learn to hate, they can be taught to love. For love comes more naturally to the human heart than its opposite.’ —Nelson Mandela.” 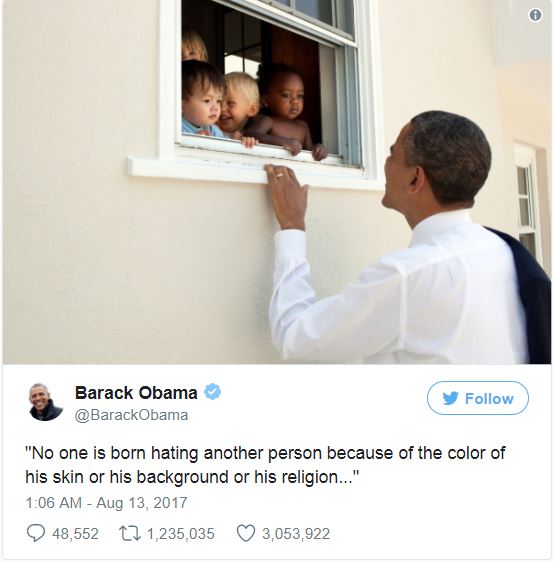 The tweet’s popularity surpassed a May 2017 tweet from Ariana Grande after her Manchester, England, concert was attacked, leaving 22 people dead — which was liked just over 2.7 million times.

It took President Trump two days to condemn the extreme racism displayed during the “Unite the Right” rally. At first, Trump attributed the violence to “many sides” instead of specifically calling out the racist actions of literal torch-wielding, Nazi flag-carrying protesters.