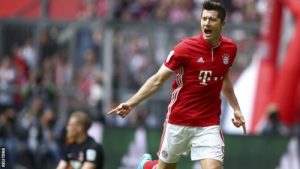 Bayern Munich forward, Robert Lewandowski ensured the Bavarians got maximum points as he  scored twice in the last 20 minutes as team’s game Werder Bremen in the German Bundesliga.

The first goal came from the boot of  Lewandowski backheeled Kingsley Coman’s cross into the net.

And he scored his sixth goal in four games this season when he put a shot between the Werder keeper’s legs.

Bayern goalkeeper Manuel Neuer kept a clean sheet on his return from a broken foot which forced him to miss the last month of last season.

Thomas Muller – who came on in the 73rd minute and had a hand in Lewandowski’s second – was unhappy at not starting.

“Well, I don’t really know what the qualities are that the coach [Carlo Ancelotti] wants to see. Obviously mine do not seem to be in 100% demand.”