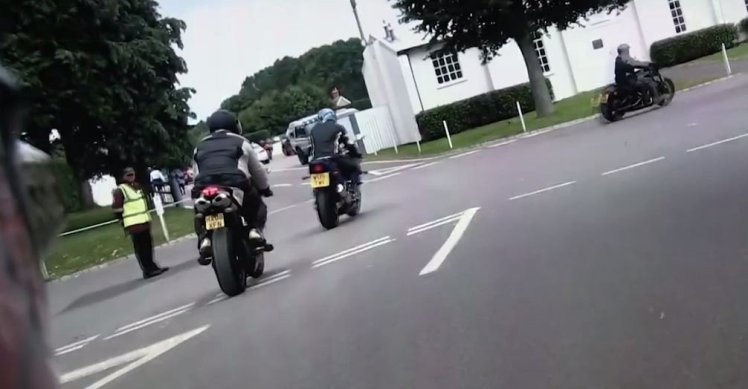 This is the shocking video which has shown the moment a motorcyclist came off his bike and fell into the path of an oncoming van.

According to Metro UK, the 50-year-old, who police said was an experienced rider, died at the scene of the crash near Goodwood in Chichester, West Sussex.

The footage shows the moment he attempted a wheelie on his Suzuki bike – but he lost control and was thrown off the vehicle.

Sussex Police has released the footage with the support of the victim’s family in a bid to warn bikers of the dangers of irresponsible riding.

Sergeant Phil Badman said: ‘This video is intended to show what can happen when you are not fully in control of your bike.

‘Motorbikes are powerful machines and they should be treated as such, as failing to do so can lead to devastating consequences.

‘The victim was an experienced rider who had enjoyed numerous outings with fellow bikers prior to this incident.

‘He and his friends were all wearing the appropriate clothing and safety equipment, and no one anticipated that this ride would be his last.

‘It was undoubtedly a hugely traumatic experience for all parties involved, and our thoughts remain with them.’

Motorcyclists account for 20% of all road deaths in the UK despite making up just 1% of traffic.