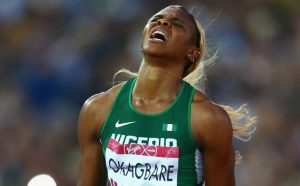 Blessing Okagbare’s hope of winning  a medal was dashed at the ongoing IAAF World Championships  as she failed to make the podium in the women’s long jump final.

Okagbare, who is appearing at the worlds for the fourth time, started with a jump of 6.40m in her first attempt before improving to 6.55m in her second attempt. Her third attempt was 6.47m while she fouled her fourth effort and her final effort of 6.31m couldn’t land her in the top half of the table.

In the women’s 100m hurdles, Lindley ran in heat 1 of the semifinals. She finished seventh in a time of 13.18secs. She was 20th overall in the standings after the semifinals.

Her compatriot, Amusan after a slow start finished fourth in heat 2 in 13.04secs. Her time was too slow to earn her a qualification as one of the three fastest losers. She was ranked 14th at the end of the semifinals.

The country’s hope of winning any medal now lies in the relay events, which preliminaries hold today.

Nigeria will compete from lane two in the heat 1 of the women’s 4x100m alongside Ecuador, the USA, Great Britain, Ghana, France, the Netherlands and Switzerland.

In the 4x400m heat, the Nigerians will line up in lane two of heat 2 against Germany, South Africa, Jamaica, Bahrain, Italy, Ukraine and Poland.