Suspected kidnapper, Chukwudumeme Onwuamadike, more popularly known as Evans, has a few minutes ago, pleaded guilty to conspiracy and kidnapping before a Judge at the High Court in Ikeja, Lagos.

Evans and his five of his accomplices were arraigned before the High Court on two counts bordering on kidnap and conspiracy.

Yesterday, a Lagos Division of the Federal High Court adjourned till September 5 over the fundamental rights application brought by Evans.

Justice Abdulaziz Anka had initially fixed Tuesday to deliver judgement on the suit but a lawyer to the Inspector General of Police and the Nigeria Police Force, David Igbodo, appearing for the first time since the hearing began, said he had filed a counter affidavit before the court. 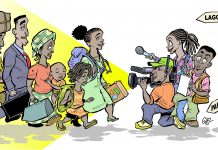