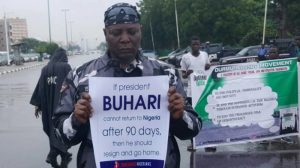 Charly Boy has accused the Presidency of hiding the true nature of President Muhammadu Buhari’s illness.

In a statement issued by the maverick musician and members of the #ResumeorResign protesters on Thursday, they accused the Presidency of playing a chess game with the lives of 200 million Nigerians.

Read the full statement issued by Charly Boy and others below:

In the last 24 hours, reports have emanated from different sources that during the course of his 94-day medical sojourn in the United Kingdom, President Muhammadu Buhari (GCFR) has received treatment for an undisclosed form of cancer. These reports state that this treatment includes chemotherapy and go further to declare that President Buhari has become affected thereby to the point where he has severe difficulty communicating with the medical personnel treating him as well as close aides and family who are around him.

2. These reports are difficult to confirm or refute because of the secrecy with which President Buhari’s aides have handled information related to his illness. The reports are deeply disturbing and are a source of grave concern. Even more disturbing is the fact that there are several conspiracy theories circulating as to the state of health the president and how the secrecy behind his ailment persists only to favor the cabals and influence peddlers playing chess with the lives of 200million Nigerians.

3. It is in this light that we ask the Presidency to clear the air by providing full disclosure of the details of the illness which the President suffers from and the nature of treatment he is undergoing to combat such illness.

4. Nigerians will recall that for a long time, false information has been peddled around parts of the country that President Buhari was poisoned. Therefore, It is imperative to point out that only full disclosure of the details of the President’s ill-health will put an end to reports of this nature and prevent the sort of social upheaval the lack of information may cause.

5. Finally, we have read the statement made by the Senior Special Assistant to the President on Media & Publicity, Alhaji Garba Shehu, to the effect that our demands for full disclosure and resignation upon confirmation of incapacitation are an attempt to distract the government from the fight against corruption.

It is shameful that this pedantic sort of reasoning is still being applied to critical issues at this point of our national history. At no point has any correlation been made between our demands on President Buhari’s health status and the fight against corruption.