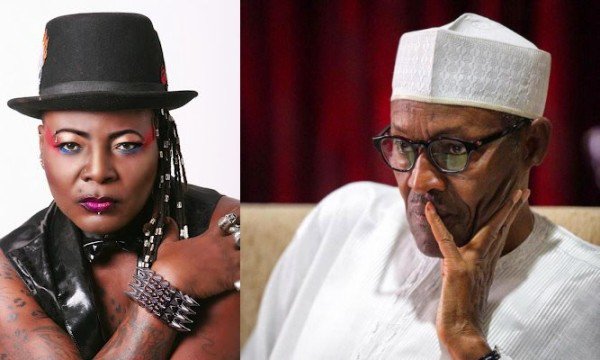 President Buhari, in his nationwide address Monday, reiterated his administration’s zero tolerance for secessionist agitations by some ‘irresponsible’ elements.

Reacting to the speech, Charly Boy, who penultimate week led protesters on daily sit-outs at the Unity Fountain in Abuja demanding Buhari either resumes duty or resigns his position, said that he shares similar thoughts with the President on the Nigerian project.

According to him, there is a good reason for all Nigerians to believe in the unity of the country if the fundamental issues of our value erosion are addressed. He also said that Igbos agitating for an independent Biafra state over perceived marginalization by the government at the centre of the federation are missing a fundamental point; which is sitting round with other ethnic nationalities to dialogue and fashion a way forward for a better Nigeria for all.

He told Vanguard when asked his opinion on the issue of Nigeria’s unity as espoused by the President: “A lot of my Southern brothers are asking why I should believe in Nigeria. My answer is why not if we can solve the fundamental problem bedeviling the nation which is the fact that our values have been eroded.

“The youths are learning from their elders who are the political leaders. So far, we have seen elders and leaders who are enmeshed in corruption. Who are basically riff-raffs who are running around, who have managed to corner government. These are not the kind of people to move the country forward.
“I want to see a better environment for all Nigerians. In fact, it’s painful that some of our children abroad no longer wish to return to Nigeria. Even, the ones in Nigeria want to leave the country.
“If we push hard enough, Nigeria might just get better or something more positive than the present situation might happen, because we can’t continue to exist like this.
“I am an Igbo man. Even my people are ‘yabbing’ me and asking me why break a sweat over Nigeria. Let’s face Biafra instead. But I say to them; I may be a dreamer but I still believe in Nigeria.
“It is the same fight ‘Our Mumu Don Do’ movement and what the pro-Biafra agitators are struggling for. It is almost the same fight. “Biafra people are saying that they have been marginalized and that is true. Nnamdi Kanu has brought Biafra and put on the table and exposed the marginalization of the Igbos which is right.
“But ask me; Biafra or death? No, I don’t believe in that. But let us sit around a table and discuss Biafra. Yes, I believe in dialogue. That is what we need to do.
“That is why ‘Our Mumu Don Do’ is telling young people please go and be part of this nation building and don’t leave it to the old people; otherwise you will have no future in Nigeria.”