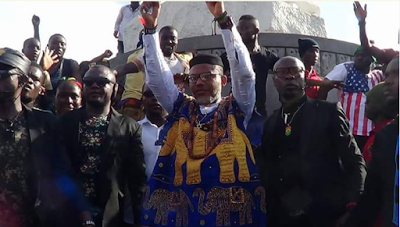 Igbo leaders and traders in Lagos have expressed disgust at the reported plan by the leader of the separatist group, Indigenous People of Biafra (IPOB), Mazi Nnamdi Kanu to storm Lagos soon in continuation of his visits to states of Nigeria, warning him to desist from making such an adventure, because he won’t be welcome in the city.

Most of the Igbo leaders and traders in Lagos who spoke to Sunday Telegraph in separate interviews, warned Mazi Kanu and his followers that by what they profess, “taking their Biafra outside the East amounts to warmongering.”

They further charged them to desisting from heating up the polity by crisscrossing Nigeria in contravention of his bail conditions.

Chief Chiemeka Ibeh of Alaba Amalgamated Traders Association, warned the IPOB leader to stay away from Lagos, urging him to leave Igbos in Lagos alone because his visit to the commercial nerve centre of the country it will create the impression that Igbos in Lagos are supporting Kanu and IPOB activities.

“He should keep his Biafra in the East where our unemployed youths are following him all over the place, not knowing what they are dabbling into. Most of these youth do not understand what Biafra is about and what it has cost Igbo people.

“Since his actions led to the quit notice by the Arewa youths, I expected Kanu to have paid upfront all transport companies on the northern route to be conveying Igbo people who might be interested in coming back to the East, but he has not paid a kobo to anybody. Is he bothered about the economic wellbeing of the people whom his actions could dislocate?”

Also speaking to Sunday Telegraph, High Chief Egbogu Udemba, electronics dealer and a member of the executives of the Alaba International Market Electronic Dealers Association said Biafra is bigger than Kanu and cannot be a project for a young man like him and the youths he controls.

“We appreciate the fact that the agitation is the product of years of neglect and marginalisation of the zone by successive administrations in Nigeria, as you can see that agitations are coming up from different zones of the country now. These issues are things that should be well articulated as Ohanaeze has done and an informed demand made.

“The tension Kanu is creating will not do us any good; it might further drag us back. As you can see our Niger-Delta brothers are concentrating on economic agitations and government is answering them. Nobody is looking in our direction because we are assumed to be asking for Biafra, which unfortunately nobody will give us,” Udemba said.

According to him, what the country needs now is restructuring “and the issue is bigger than IPOB, MASSOB and Arewa Youths. Igbo leaders, Igbo intelligentsia, traders associations and our professionals should come together and pursue the cause with one voice.

Udemba said: “Ohanaeze has taken the lead by making the demand for restructuring so that we can have a true federal system of government. I think Kanu should rather mobilise the youths who are listening to him to support the demand, than going from state to state and threatening the forthcoming governorship election in Anambra. He should use the followership he commands to drum support for true federalism.”

This development came as a prominent auto spare-parts dealer at the Lagos International Trade Fair Complex and a leader in the Auto Spare Parts & Machinery Dealers Association (ASPAMDA), Chief Alex Ejiofor has warned Nnamdi Kanu to desist from distracting struggling Igbo people from concentrating on finding their daily bread.

He wondered if Kanu had not asked his father what happened to Igbos during and after the civil war. “If his father did not tell him my father told me that we were reduced to the biblical ‘hewers of wood and drawers of water’ in Nigeria at the end of the war in 1970.

It is true that we are still suffering from the effects of that war till today, but Igbos in all parts of Nigeria have made a lot of progress and cannot afford to return to that stage where an Igbo who left over a million British Pounds in his account and ran home for safety at the outbreak of the war, was given 20 Pounds in 1970 after the no victor, no vanquished declaration.”

According to him, Igbos’ investments outside the core Igbo states are in trillions of naira. “What is Kanu thinking about that? And if I may ask, what is the volume of Kanu’s investment either in the South-East or in other parts of the country? Does he not know that he is putting those investments at risk and endangering the source of livelihood of other people? He should perish the thought of coming to Lagos, and if I may advise, he should change strategy or join forces with Ohanaeze.

“He has done well by bringing the marginalisation of the South-East to the front burner again, but should sustain the discussion without causing his people harm,” he said.

The youths who are either apprentice traders or labourers at the Alaba International Market and Trade Fair, however, expressed excitement over of the IPOB leader, stating that they are waiting for him.

“I read it on Facebook on Saturday, we are waiting for him. We will close the market to receive him; he is the leader of our time. He will take Biafra to the Promised Land; we are happy that he is visiting. We heard that he has visited Port Harcourt, Ebonyi, Owerri and other places.

We are also expecting him here. All hail Biafra!” Chigbo Ebuka who said that he works with an electrical parts dealers at Alaba International Market, said.

Kamsiyochukwu Udoaku, an apprentice to a machine parts dealer in ASPANDA said without the knowledge of his boss, he has bought his Biafran flag, cap and vest to be used on that day when Kanu would visit Lagos.

Asked why he is going without his oga’s knowledge, he said, “He is an old man, he is afraid. He further asked, but what has Kanu done wrong? Did he commit any crime? Is he a member of Boko Haram or Fulani herdsmen? Did he carry any arm? All he is asking for is our own country where nobody will treat us as second class citizens. If the only reason why they want to kill him is for asking for our freedom, we will follow him,” he said.

It would be recalled that following the success of their rally at Owerri, Imo State capital, last week, the IPOB leader, Nnamdi Kanu took to Facebook to reveal his intention to visit Lagos soon, probably to gather all IPOB members and then align with them on the way to achieve Biafra soon.

The post shared on its twitter handle penultimate Saturday, Radio Biafra revealed that IPOB and its leadership …“shall shut down Lagos, expect Nnamdi Kanu soon.”