Home Metro News Dreaded Baddo Member is Arrested Inside Lagos Church After Smashing a Lady’s...
Facebook
Twitter
WhatsApp
A suspected member of the dreaded Badoo cult group has been arrested after smashing a lady’s head at a white garment church at Irapade area of Agbowa, Lagos. 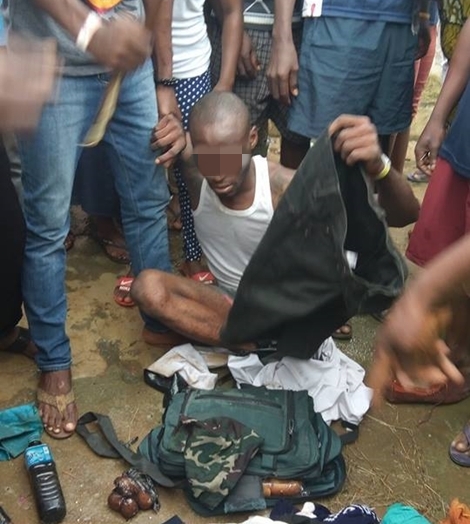 File photo
Plan by a suspected member of the dreaded Badoo cult group to kill a member of Ori-Oke branch of a white garment church at Irapade area of Agbowa Lagos, has been foiled, following his arrest, Vanguard reports.
The suspect, Ahmed Adeleke, 29, who disguised as a worshipper, attended the church’s vigil, at the end which a female member, who was sleeping at a corner of the church, was heard shouting that she had been attacked.
When curious members got to her, it was discovered that her head had been smashed. She was said to have pointed to the direction where the suspect took.
Some church members went in the direction and reportedly found the suspect changing his clothes. He was said to have denied the allegation.
But on further observation, the white garment which he pulled off was discovered to be blood stained.
Parading the suspect yesterday at the Police Officers Mess, Ikeja, the Lagos State Command boss, Fatai Owoseni said: “Policemen from Ipakodo Division rushed to the church.
“Although the suspect denied the accusation, when the area was searched, three handkerchiefs (white, blue and red) were recovered from him. Also, a grinding stone, which he used to hit his victim on the head, was also found.”
The suspect, however, denied being a Badoo member.
He said: “I was a Muslim, but later converted to Christianity. I live at 9, Ojokoro Street, Agric. I was invited to worship there that night by a senior colleague, Kehinde, at the tailoring shop where I work.”
However, asked if Kehinde had come to identify him, he shook his head, saying “how would she come? She may be afraid of being arrested as well.”
Source: Tori.ng