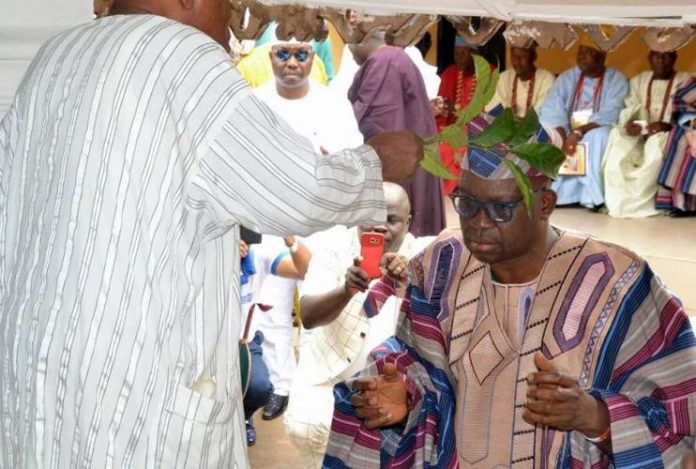 The Ewi of Ado Ekiti, Oba Rufus Adeyemo Adejugbe, on Friday conferred the title of Apesin Apogun P’ote of Ado Ekiti on Governor Ayodele Fayose of Ekiti State, as part of the ceremonies marking the 2017 Udiroko Festival of the community.

Oba Adejugbe, at the elaborate ceremony held at the new hall constructed at the palace of the Ewi by Fayose and his friends, also conferred chieftaincy titles on the governor of Gombe State, Alhaji Ibrahim Dankwambo, and the member representing Remo Federal Constituency in the House of Representatives, Oladipupo Adebutu.

Fayose, while speaking at the occasion, expressed appreciation to Oba Adejugbe and, again announced that the candidate his party would present for the 2018 election will defeat the All Progressives Congress (APC). 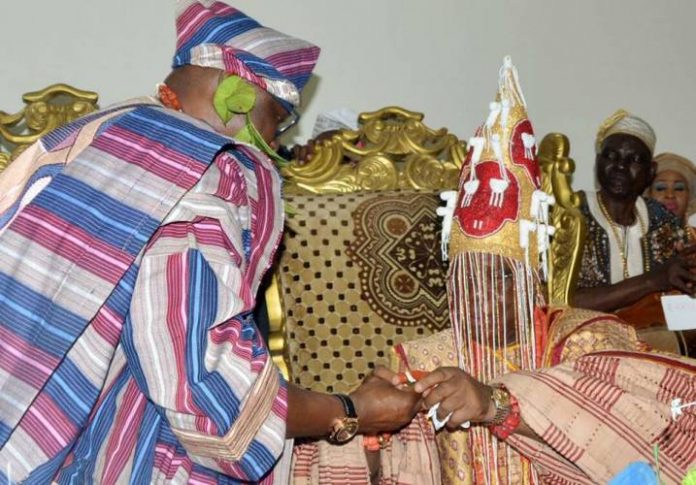 Fayose stressed his grassroots progress in the politics of the state, claiming that he commanded people’s goodwill he said would see his party through the election.

He assured the monarch that his successor would not disrespect them, pointing out that the royal fathers, according to the history and tradition occupied sacred positions that needed to be venerated and given utmost respect.

He said: “The governor that will come here to perform and respect all the monarchs in Ekiti will be presented by the PDP for 2018 poll. We know what you stand for and what you represent. You are so important to us and we will treat you with respect.

Fayose thanked Ado Ekiti people for their support for his political career, saying “your support accounted for why I won in 2003 and also in 2014. In fact, I can’t appreciate you enough and God will continue to bless this town and the good people of Ekiti State.”

In his speech, Oba Adejugbe said the honour was bestowed on these prominent Nigerians to appreciate them for their sterling performances as representatives of the people.

Oba Adejugbe urged them to use the new titles to rededicate themselves to the service of humanity now and wherever they find themselves in the future.