Home News Feed FG Finally Asks Court To Revoke Nnamdi Kanu’s Bail
Facebook
Twitter
WhatsApp
The leader of the Indigenous People of Biafra, Nnamdi Kanu might be in serious trouble as the Federal Government has asked a court to revoke his bail. 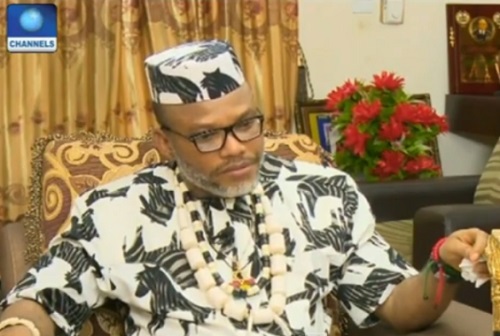 The Federal Government has finally asked the Federal High Court in Abuja to revoke the bail granted the leader of the Indigenous Peoples of Biafra, Mr. Namdi Kanu, Punch has reported.
Kanu is being prosecuted along with others on treasonable felony charges. The request was made on Friday by the prosecution through an application it filed before the court and served to Kanu’s lawyers.
The Federal Government hinged its fresh motion seeking the revocation of Kanu’s bail on the grounds that the IPOB leader had flouted the terms and conditions of the bail.
It would be recalled that Justice Binta Nyako had, in her ruling delivered on April 25, granted bail to Kanu, but dismissed the separate bail applications filed by his co-defendants — the National Coordinator of IPOB, Mr. Chidiebere Onwudiwe; an IPOB member, Benjamin Madubugwu, and a former Field Maintenance Engineer seconded to the MTN, David Nwawuisi.
The Federal Government’s counter-affidavit filed in support of the motion and deposed to by a litigation clerk in the Office of the Director Public Prosecutions, pieced together Kanu’s alleged acts of serial violation of the bail conditions imposed by the court.
It maintained that Kanu had flagrantly violated all the bail conditions. It stated that the essence of the bail, which was for Kanu to look after his health, had been defeated.
According to the prosecution, instead of using the opportunity of his bail to attend to his health needs, Kanu went ahead to inaugurate a security outfit known as the Biafra Security Service.
The prosecution said this constituted a threat to national security.
It also cited an instance of how Kanu allegedly incited his followers “to disrupt, disallow and boycott elections in south East states, starting with Anambra State governorship election scheduled to hold onvbNovember 18, 2017, if the Federal Government failed to hold a referendum for the realisation of the state of Biafra nation.”