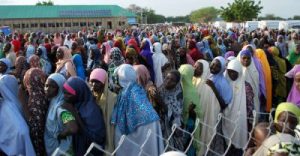 Four pregnant women have been confirmed dead, according to Médecins Sans Frontières, also known as Doctors Without Borders, of Hepatitis E at the Ngala Internally Displaced Persons camp in Borno State.

According to information on the website of the World Health Organisation, Hepatitis E is a liver disease caused by the hepatitis E virus and common in areas with limited access to water, sanitation and health services such as war zones and IDP camps.

Bellio, who said there were 45,000 people living at the Ngala IDP camp, stated that the disease spread from Niger.

The statement said, “The situation in Ngala is very worrying. The onset of the rainy season has caused repeated flooding in the camp with water gushing across pathways, latrine holes and into people’s shelters.

“There are more than 400 cases of hepatitis E in the past two months and we have treated 170 patients at our hospital, so it’s no surprise that an outbreak of hepatitis E has been declared.

“In the past two months, four pregnant women in Ngala camp have died of complications linked to the disease. Something as simple as soap and clean water could have prevented these deaths.”

Bellio said if it continued to rain for more months, there could be more cases of hepatitis E in the area.