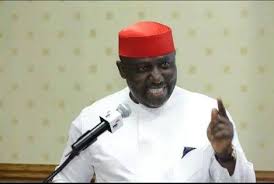 Players of  Heartland Queens,  blocked  the entrance of the office of the Imo State Governor,  Rochas Okorocha  from entering the Government  House in Owerri  on Monday in protest against their unpaid salaries.

The placard-carrying protesters, who claimed that the state government, who owns the outfit, had not paid them for  seven months, chanted anti-government slogans. The players also said they had not been paid their match allowances and win bonuses  for months.

The governor,  who drove himself to the Government House, was forced  to alight from his car to address the footballers clutching  placards, which read,  “We are the breadwinners of our families; We are suffering, Government of Imo State, pay us our seven months’ salaries; and Our dear governor, please listen to your children.”

After listening to the complaints of the  players, Okorocha,  who assured them that their demands would be met,  assigned one of his aides, Edna Njoku, to discuss with  the protesters and  give him the feedback.

The  governor then drove into the Government House.

The  captain of the Owerri side, Best Osuji, told our correspondent at the scene that they were not also happy with their  the team  manager, Charity Enwerem, because she allegedly  refused to draw  the state government’s  attention to their plight.

The midfielder stated that since they helped the team  qualify for  the  elite league, they had been abandoned by the  club’s management and the state government.

Osuji  said “Since we won the amateur league  playoffs  and qualified for the  Nigerian  the top flight, the state government has abandoned us. We don’t have a camp,  and they have  kept us in the stadium without any care.

“We go to matches late and we play on  empty stomachs,  yet they want us to produce good results.”

Heartland Queens are scheduled to play FC Robo in Lagos on Wednesday  but Osuji expressed her  doubt whether  they  would make the trip due to a lack of  money.