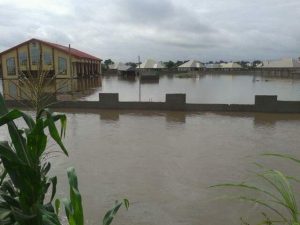 Over 15,000 persons have been rendered homeless due to the heavy downpour in Saturday night and resultant flood that submerged over 2,000 houses in Makurdi, the Benue State capital, and its environs.

Areas that were hit the most with the disaster, are Achuasa Media Village, Wadata Rice Mill, Behind Police Zone Four, Larozone Nyiman Quarters, Judges Quarters, Gboko Road, Logo, New Bank Road, Abu, Shuluwa Road and the neighbourhood of Radio Benue, where all the houses in the community, including the transmitter of the state-owned radio station, were submerged.

Meanwhile, Governor Samuel Ortom, has appealed to the Federal Government to come to their aid to avoid a repeat of the  2012 when River Benue broke its banks, also swept away hundreds of millions of Naira worth of property and valuables in a downpour that lasted over four hours.

Ortom made the appeal when he inspected flooded areas in Maiduguri yesterday, and described the problem as overwhelming.

He also said that structures constructed on drainage channels and flood plains would be demolished.