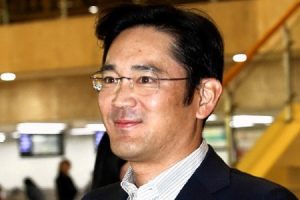 The Vice Chairman of  Samsung Electronics, Jay Lee was in tears when he was denied wrongdoing on Monday as prosecutors sought a 12-year jail term on charges that include bribing the former president to help cement control of the South Korean tech giant.

Lee, the de facto leader of one of Asia’s largest conglomerates, has been in detention since February on trial for charges ranging from embezzlement to perjury, in a scandal that gripped the country for months and led to the ouster of former president Park Geun-hye.

He will face the longest prison term on record for a South Korean conglomerate executive if the court finds him guilty when it makes a ruling Aug. 25, two days before Lee’s current period of detention ends.

Other charges he faces include wrongfully transferring assets overseas and hiding the proceeds of a crime.

“I have never asked anyone, including the president, for anything for the company or my personal gain,” said Lee in a final statement, his voice wavering.

He stopped several times during his speech, holding back tears.

“I deeply regret that I have given such disappointment and apologize,” he said.

Samsung Electronics offered no comment regarding the prosecutors’ demand.

The company’s shares ended down 0.3 per cent on Monday, erasing minimal gains seen early in the session.

The prosecution said Samsung’s intent in paying up for two funds backed by Park, and sponsoring the equestrian career of the daughter of a confidante at the center of the scandal, was to get government support for efforts to cement Lee’s control of the smartphones-to-biopharmaceuticals empire.

“Even though Lee is the ultimate receiver of the gains (from this bribery case), he has been pushing the blame on others accused,” prosecutor Park Young-soo told the court.

The defence reiterated Lee’s denial of wrongdoing, questioning whether the prosecution was relying on public sentiment to secure a prison term for Lee, 49, whose father, the group patriarch Lee Kun-hee, was hospitalised in 2014.

He has not been seen in public since.

Lee’s lawyers argued that his so-called overarching intention of cementing ownership control was “a fictional construct” made up by prosecutors, with moves such as the merger of two Samsung affiliates in 2015 aimed merely at ensuring survival and growth of individual companies.

Samsung Electronics investors have said their chief interest in the trial has been how long Lee will stay in detention, sidelined from fully participating in large-scale decision-making.

“It (Samsung Electronics) is doing well now, but will his absence show up in its performance two, three, five years from now? That’s the question,” said Park Jung-hoon, fund manager at HDC Asset Management.