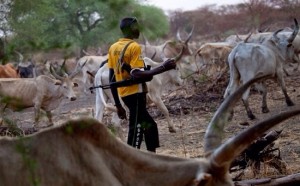 Ortom, who raised the alarm at NSKT Church in Taraku, Gwer Local Government Area, during the burial of Mama Atese Rebecca, called on the Christian Association of  Nigeria in the state to keep interceding.

The governor, while hosting the country representative of the United Nations High Commissioner on Refugees, Edward Kallon, a few weeks ago, had noted that over 1,878 Benue residents were killed while 200 persons were still missing as a result of herdsmen attacks in the last three years.

He added that 750 persons were critically injured and over 99,427 households had been affected in the attacks with property worth billions of naira destroyed.

An anti-grazing law was enacted recently by the state government, following herdsmen attacks on Benue farmers, which were said to have peaked during the dry season.

Ortom said he had received security reports that herdsmen across the West African sub-region were planning to invade the state “because of our stand on ranching.”

He added, “The anti-grazing law our government came up with was to protect both farmers and herdsmen. I have been saying that this government is ready for any superior alternative, but to me, the global practice is ranching of cattle.

“Let me appeal to our religious leaders, CAN, to organise prayers and fasting for peace to reign in the state.”