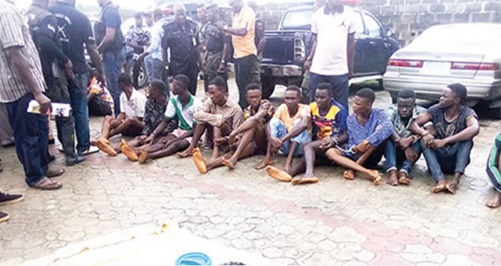 31 year old man with a hunch and 15 others have been detained by the Bayelsa police command for robbery and cult related activities.

According to Commissioner of Police, Mr. Asuquo Amba, 29 persons from the suspects were said to be arrested in connection with cultism and armed robbery, while two were arrested for kidnapping.

Different types of firearms, including nine locally-made pistols, were recovered during the operations.
Amba said,

“On July 21, 2017, at about 10.30am, policemen from the Azikoro division responded to a distress call that cults were entering the Azikoro Community Secondary School.

“Consequently, plain-clothes policemen were dispatched to the scene and arrested one James Loveday, an undergraduate of the Federal University, Otuoke, with a locally-made revolver pistol.”

Amba also said that the gang member confessed to killing one Luke Inengite, a 30-year-old man from Agbura community, whose corpse was found in a pond in the community.

“On July 24, 2017, one Joy Epidi, a housewife, was kidnapped along Imiringi Road. The kidnappers called the husband and demanded a ransom.
“Consequently, police operatives swung into action and arrested one Timipre Moni. The suspect had earlier called a businessman, Doubra Komuko, threatening him to part with N5m or his family would be kidnapped,” the commissioner added.

The 31 year old man named as Tatoh, said he is the leader of the gang.
He said,

“I am a leader of the dreaded cult group, the Highlander.”