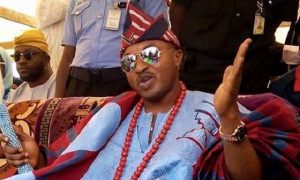 A special prayer session was organised for President Muhammadu Buhari by Muslims, Christians and traditionalists at his palace in Owo town, Oyo State by the Oluwo of Iwo, Adbulrahsheed Akanbi.

The monarch prayed for the President full recovery from his sickness and also urged citizens to pray for their leaders.

He said, “As I have prayed for Buhari today, new life has come for him,” he prayed. “He must spend eight years in power despite all obstacles from opposition.”

He also said he was willing to bear any sickness that is ailing the president, saying that those who love the country must love the leaders as well.

“It is painful that those who launched that campaign of ‘Resume or Resign’ are not patriotic as they claimed,” he said.

“They politicised the campaign which shouldn’t be. Buhari is my son and I won’t be happy when people are wishing him dead.

“If any civil servant or police officer falls sick, will you advise them to resign? Those who are clamouring for Buhari’s resignation are not sane.

“Nigerians don’t love those that love them but they are passionate about those that hate them.

The Oluwo and other traditional rulers later rose on their feet to dance as the Christians began a thanksgiving praise for the president.

Mr. Olododo, the Imam, in his remarks, emphasised the need for religious tolerance among all religious groups.

The CAN Chairman, read from 2Chronicles 7:14 noted that God is the utmost healer urging people in positions of authority to always show obedience to God’s directive and pray for peace and harmony in the land.

Conducting the traditional prayers, Ojetunde Ajibowu, offered prayers for the president, Governor Rauf Aregbesola and the Oluwo of Iwo.

The wife of the president, Aisha Buhari, who was represented by the Wife of the Secretary to the State Government of Oyo State, Halimot Alli, appreciated the Oluwo and Nigerians for their relentless prayers for her husband.

She also urged them to continue their support for the present administration.