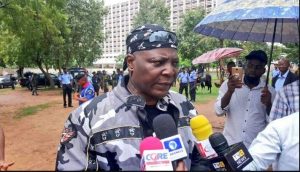 Kayode Salako, husband of popular Yoruba actress Foluke Daramola, took to social media recently to criticize Charly Boy for his involvement in the ‘resume or resign’ protest in Abuja demanding for the return of President Buhari from his ongoing medical trip to London. Salako questioned why Charly Boy, who he described as bored, did not organize any protests against the former government as they reportedly looted Nigeria without conscience.

“There are intelligent and necessary protests, this one is unnecessary and unintelligent. May be the organisers are just bored and have nothing serious to do with their time at the moment. I think Charlie Boy is bored and needs a bit of more government attention or patronage. It is not all protests which makes sense. This one does not and sounds as if it is a piece of politically motivated social exercise just to kill bordomness and, may be, test his social relevance. Protests and rallies are necessary tools in social democratic engineering and re-engineering, but this one Charlie Boy is running is unnecessary, not well thought out and belittling of the age and education, while I know that what is personality is, does not matter any way, I think he is simply bored. At his age, he should be bored. When an active and troublesome man like him is over 60, that tendencies to be bored is inevitable or how many rallies and protests did he lead, organise or take part in when the immediate past government looted Nigeria without conscience and ran her like an animal farm?”

“Our social psyche as a people has been deliberately so affected and damaged by the political class that, up till now, many Nigerians won’t even be able to know when they see the same good government and good governance they desire and clamor for any more. The same Charlie Boys who hobnobbed and drove the immediate past government who looted and ran Nigeria like an animal kingdom is the same man who is now coming out to keep protesting against this very responsible and disciplined government. I insist, on this protest, Charlie Boy is not doing it for the people ,but his own self seeking purpose or may be bordomness. He is merely protesting against a man who has not committed any offense against the constitution upon which our democracy runs. So, this Charlie Boy’s protest is unnecessary, unintelligent and uncalled for. I feel he is simply bored and needs attention just the way our grand parents agitate for it when they are bored,” he said.