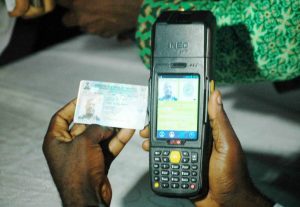 The Kwara lndependent Electoral Commission has said that it would not use card readers for the November 4 council polls in the state.

The commission’ s chairman, AbdulRahman Ajidagba, made this known at a meeting with representatives of registered political parties in his office in Ilorin on Friday.

The chairmanship and councillorship elections into the 16 local governments have been scheduled for November.

The News Agency of Nigeria, NAN, reports that Mr. Ajidagba said that the state was not financially buoyant to acquire card readers for the council polls.

“We abandoned the use of card readers for the local government elections to avoid hitches that may occur from the machines while the elections are in progress,” he said.

The Kwara electoral commission boss, however, promised a credible, reliable and fair election even without the card readers.

He described the political parties as the major players in the conduct of the election, solicited their cooperation and support for the success of the exercise.

He also advised the representatives of the parties not to incite the electorate before , during and after the elections , saying no credible poll could be achieved in an atmosphere of chaos and acrimony or violence.

He said the commission would soon release the time table for the polls to enable stakeholders to fully prepare for the exercise.