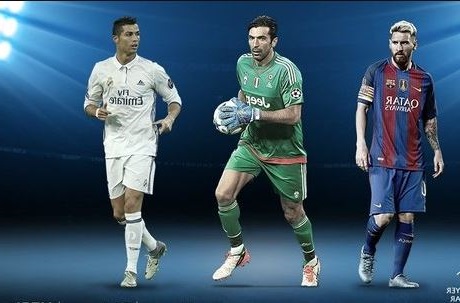 Real Madrid stricker, Cristiano Ronaldo, Barcelona star Lionel Messi and Juventus goalkeeper Gianluigi Buffon have been confirmed as the three nominees for the 2016/17 UEFA Men’s Player of the Year Award.

In a statement on UEFA website, it was noted the winner of the prize will be confirmed on Thursday, August 24, when the draw is made for the Champions League group stages.

UEFA also revealed the seven other players who make up the list.

According to UEFA, “The shortlist of three players was selected by a jury comprising the 80 coaches of the clubs which participated in the group stage of the 2016/17 UEFA Champions League and UEFA Europa League, along with 55 journalists selected by the European Sports Media (ESM) group, representing each of UEFA’s member associations.’

The prize, formerly called the Best Player in Europe Award, was won by Real Madrid star Ronaldo last year and has twice been given to Barcelona forward Messi.

Ronaldo will be the big favourite for the title after playing a great part in helping his team win the La Liga and the Champions League title last season.