Home National News Odd News Man Ties Up His 7-Year Old Daughter In A Sack In A...
Facebook
Twitter
WhatsApp 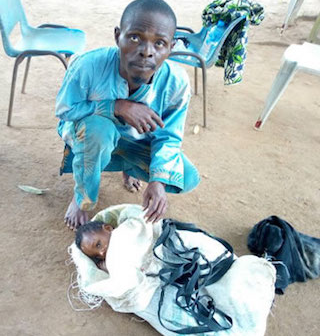 The Ogun state police command have arrested one Nasiru Adeyemo, and his wife, Idayat, for cutting off the index finger of his daughter from his previous marriage, tying her up in a sack and dumping her by the roadside to die at Asabala area along Papalanto-Sagamu Road in the state on Sunday, August 13th.

A statement by the state’s police public relations officer, Abimbola Oyeyemi, says that passersby who saw the sack alerted the police and when it was loosened, it was discovered to be a little girl who was writhing in pain following her cut off finger. She was taken to the hospital for medical examination. After she was stabilized, the little girl told the police that it was her father and step mother that tied her up in a sack and dumped her on the road.

“On the strength of the information, the DPO Owode Egba, CSP Shehu Alao, led his men to the scene, where the white rice sack was untied. Surprisingly, a seven year-old-girl, whose right index finger was cut off, was found inside the sack and dumped at the roadside since Friday. Having realized that the girl was still alive, she was quickly taken to the hospital for medical attention. It was when she regained consciousness that she informed the Police that her father and step-mother were the ones who cut off one of her fingers before tying and putting her inside the sack before dumping her inside the bush to die. Upon the information from the victim, a manhunt was launched for the father and his wife and they were arrested in the evening of Sunday. The duo are currently undergoing interrogation.”

Oyeyemi added that the state Commissioner of Police, Ahmed Iliyasu, has ordered the transfer of the case to Anti-Kidnapping/Cultist section for further investigation and possible prosecution of the father and stepmother.